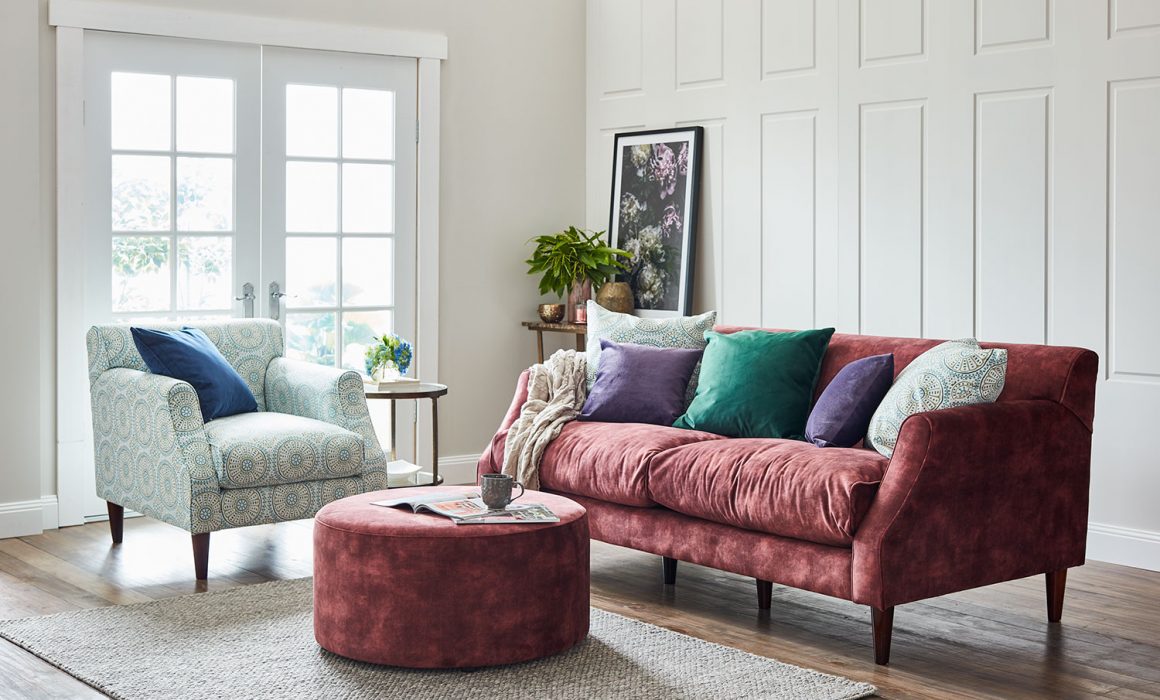 Bring a sense of elegance and charm to your home with the help of Stolz Furnishers. With the Australian made fabric lounge suites Clever and Royal, coupled with designer accent chairs, ottomans and tables, it’s possible to achieve a high-end London hotel look similar to leading interior designer Kip Kemp MBE.

This three-seater sofa features deep, plush comfortable seating and is made right here in Australia, allowing you to choose a fabric colour and pattern that suits your style. Add to this a splash of vintage pastel velvet cushions and the Cleaver Accent Chair (pictured in Warwick Omar Jungle fabric), and your designer look starts to take shape. 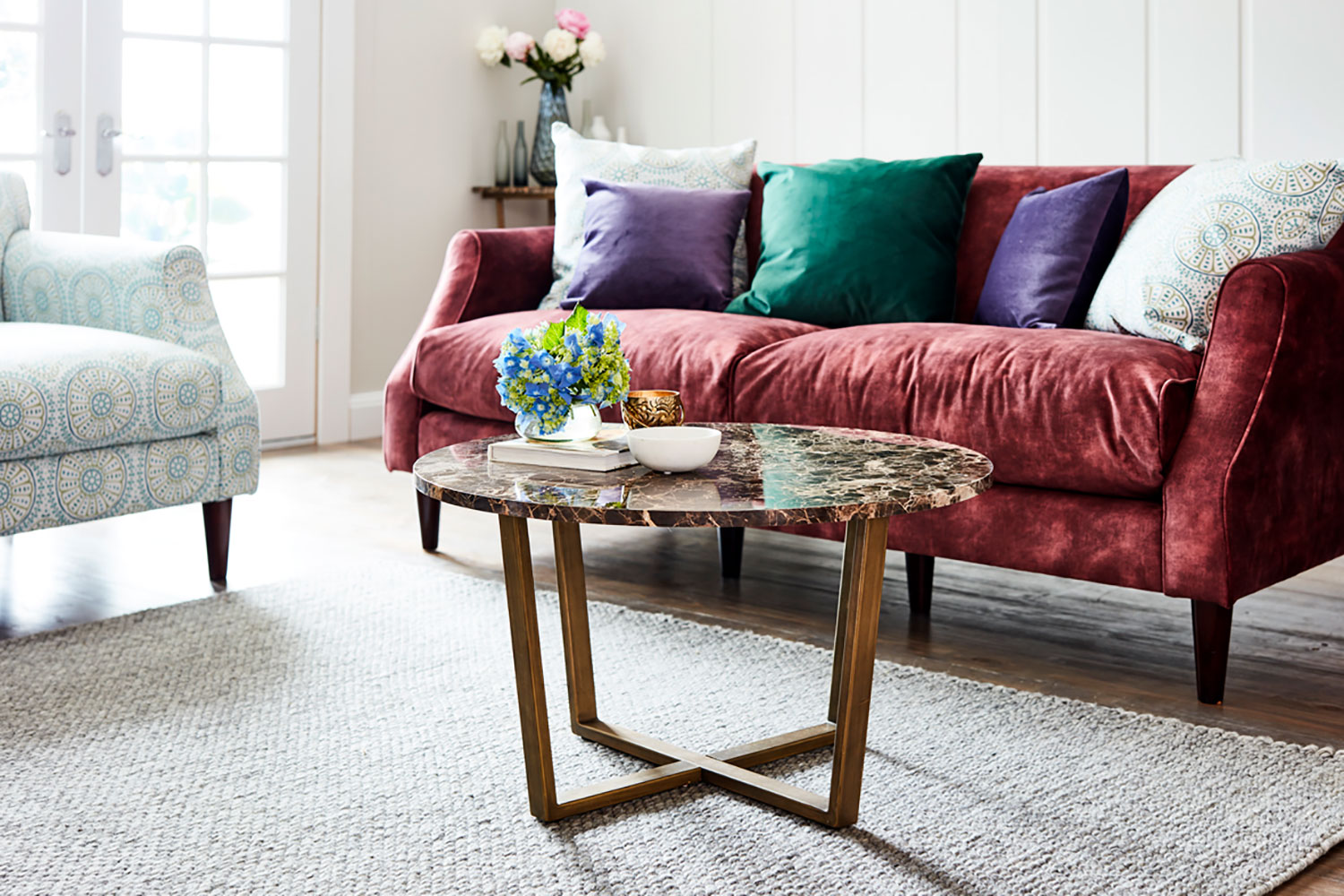 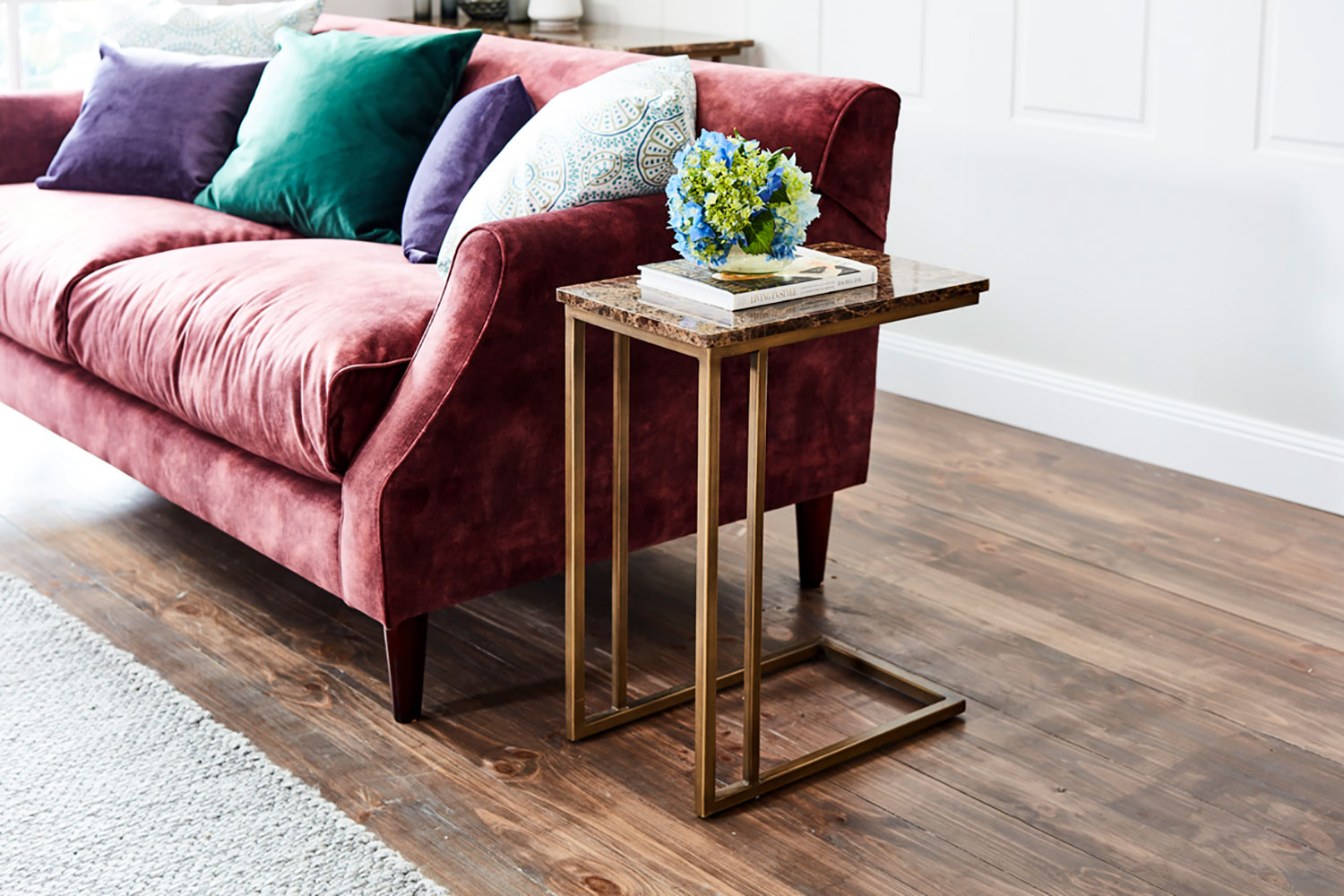 Other choices might include the Emperor Supper Table – a small, yet detailed side table featuring a naturally grained, rich brown marble top that completes its contemporary brushed bronze base. It’s perfect as a side table decorated with a book and a vase, or as a convenient space to temporarily stowaway your midnight snack, shhh! The Emperor Coffee Table is a great way of expanding on functional beauty. Its base plays with angular movement in a creative way, softly distorting orientation; this makes it a unique accompaniment to the lounge suit.

Also shown is the 800mm Homemakers ottoman in Warwick Lovely Oxblood fabric – the perfect place to rest your magazine and morning coffee. 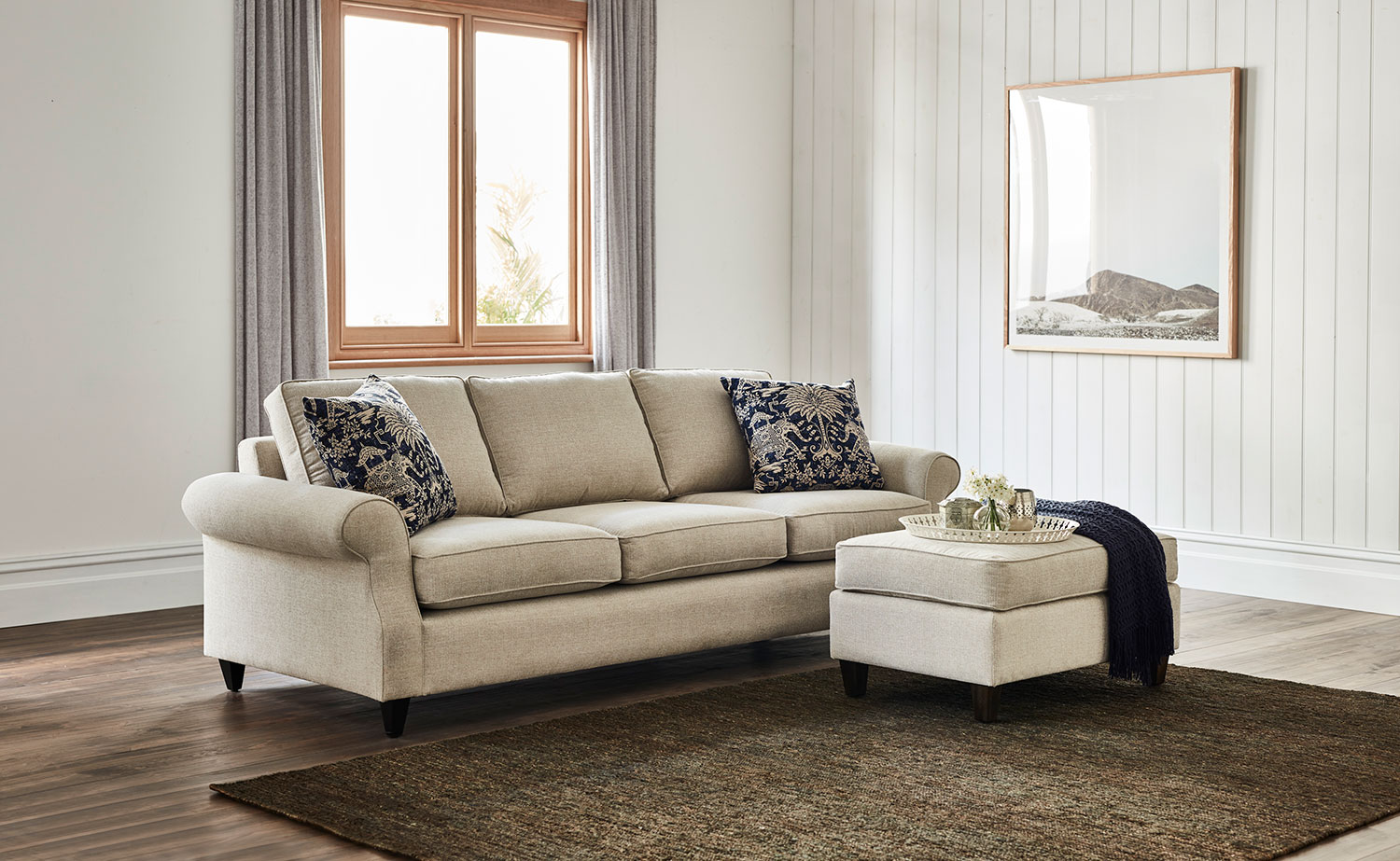 The classic style of the Royal lounge suite compliments any living room without screaming for attention. While this lounge suite leans toward the traditional London style, it can be dressed up with tropical-inspired fabric cushions from Madras Link (also available at Stolz Furnishers). The Royal is also proudly made in Australia and is available in a variety of fabrics. With scrolled arms, it’s available as a three-seater or two-seater or armchair. The ottoman is sold separately.

While one might choose to limit the colour and texture, layering (as pictured), it’s easy to modernise this lounge suite to achieve the ‘Kit Kemp look’ by carefully selecting patterned fabrics and pastel-toned floral arrangements to dress up your room. Floral print artwork also works well in such a setting, as does designer brass, glass or chrome vases. Scented candles and/or aroma diffusers in warming room fragrances (available from Stolz Fine Things) are also a fine way to complete the experience – allowing your family and friends to relax in true London chic designer style. 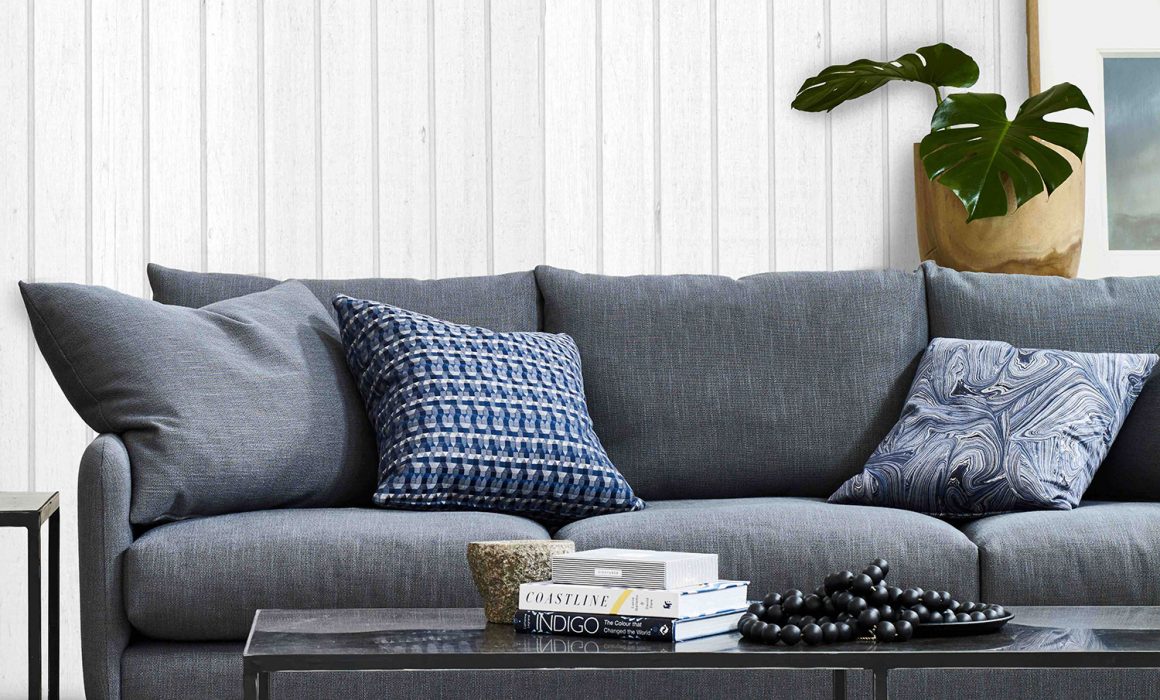 Melbourne furniture manufacturer Molmic has been constructing premium handcrafted, hand upholstered designer sofas for over 30 years. Presenting an insight into their diversity in visual design, we look at a selection of sofas plucked from two of their collections: Contemporary and Relaxed/Loose Cover. 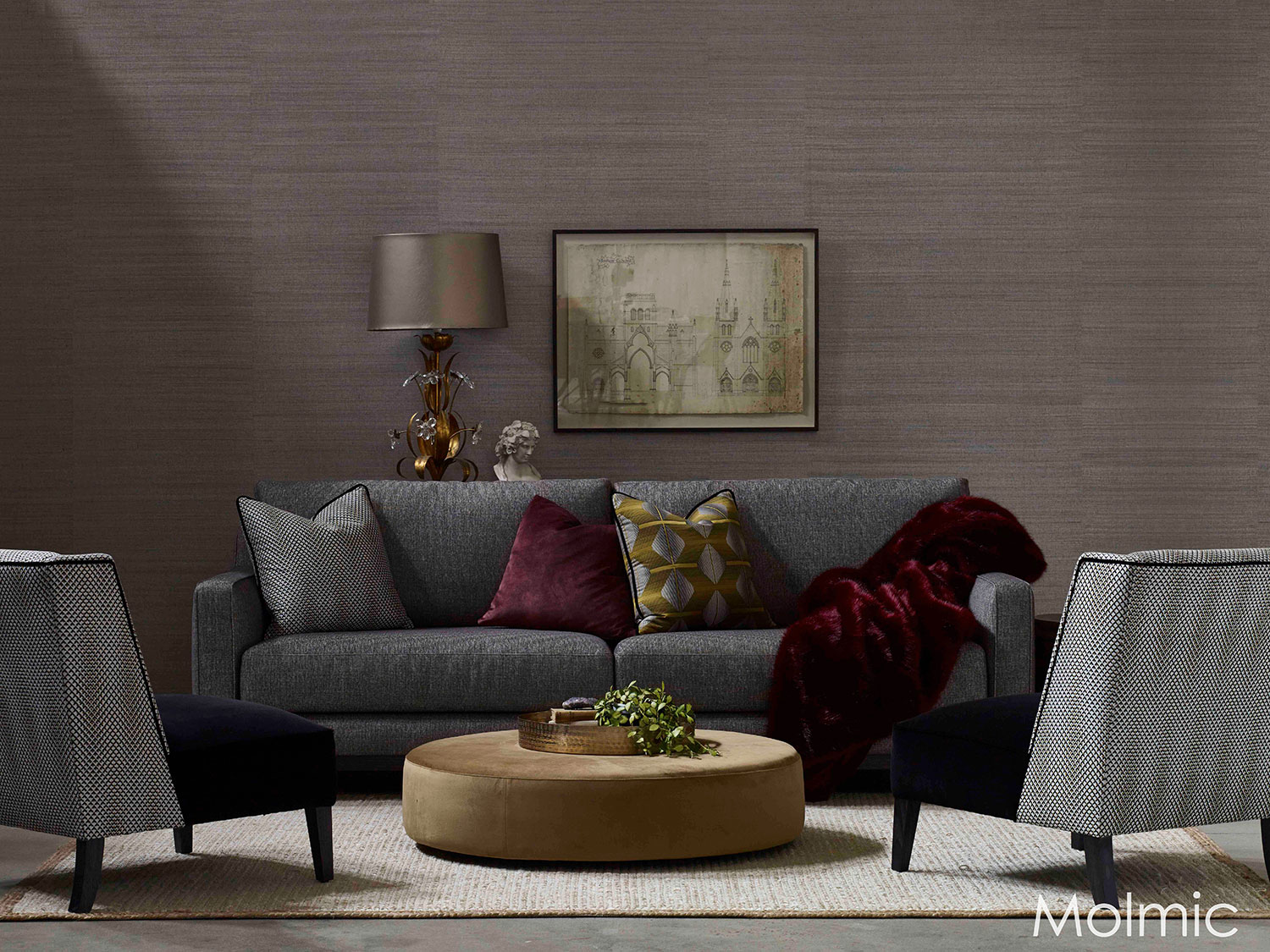 This new release product from Molmic is a contemporary take on Mid-century modern, with its defined clean lines, timber plinth and fully upholstered fabric and piping. Pictured in Molmic’s Madrid Tweed fabric, its texture is divine to touch, and with soft top seat cushions, it’s certainly far more comfortable than its 1960s influencers. 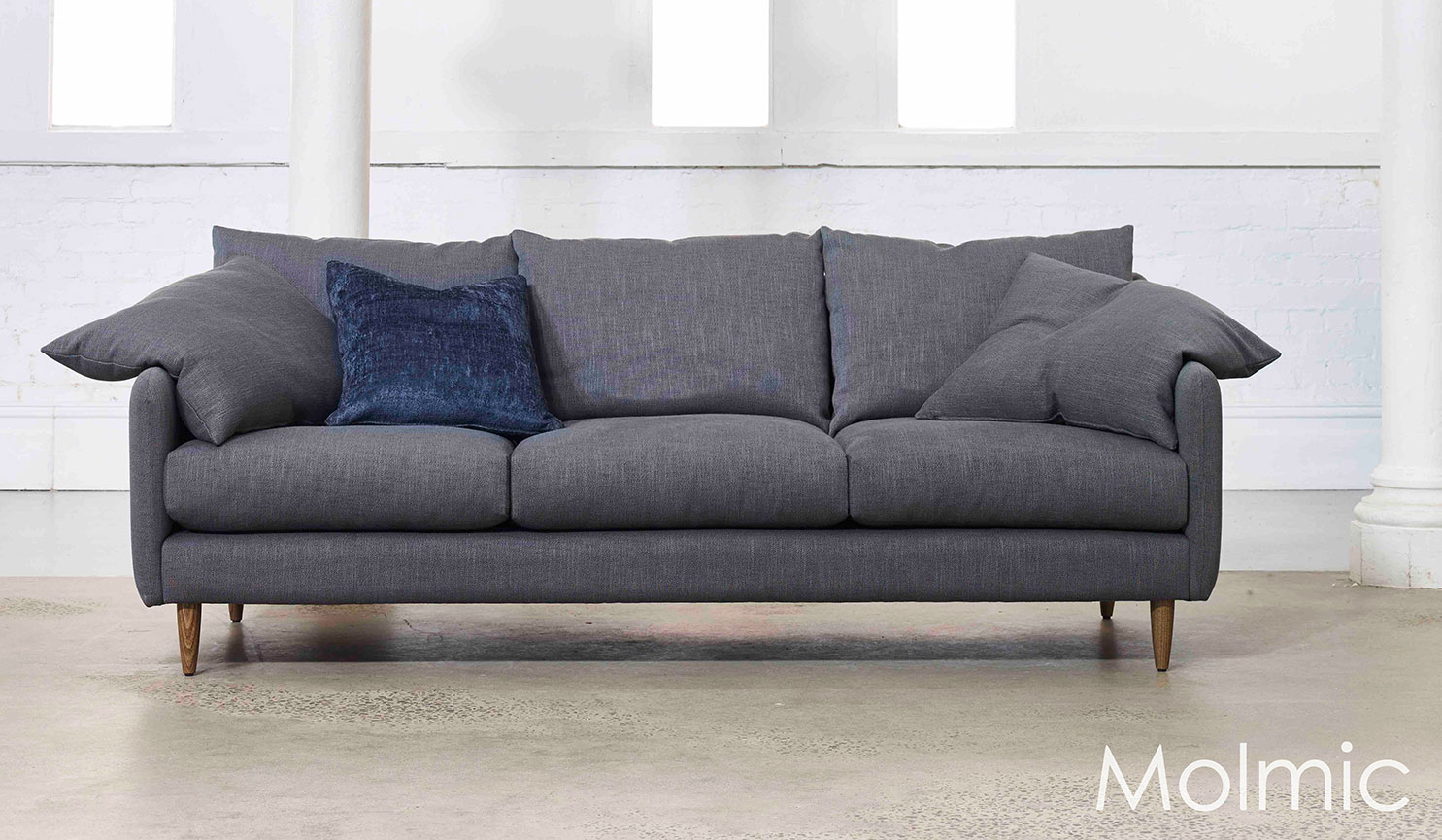 Floyd is one of Molmic’s most versatile and highly functional sofas. While its design focuses on comfort and functionality, its cushion and arm design clearly showcase Molmic’s highly unique visual appeal. Turned timber legs are a beautiful and sturdy inclusion. The no-sag steel sprung suspension provides lasting durability, and the feather comfort wrap cushion filling offers the ultimate in laid back relaxing comfort. Shown in Molmic’s Axiom Storm fabric, this calm colour tone is neutral enough to fit within a range of home colour schemes while commanding a bold strength. 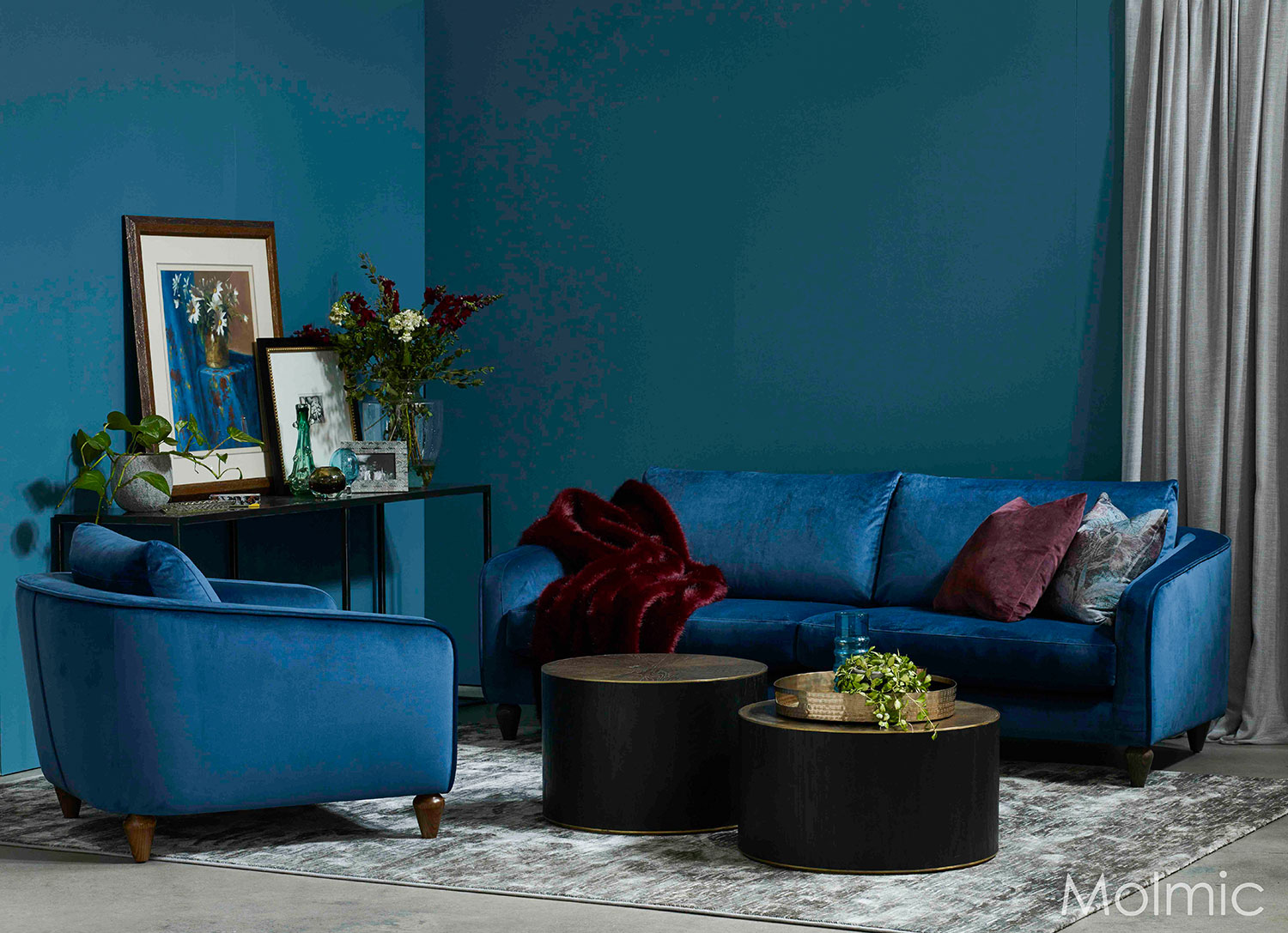 Montana is a perfect addition to any space that requires a detailed lift, a contemporary take on the Glamour and exuberance of 1920s Art Deco style. Pictured in rich vintage influenced Glamour Teal velvet, Montana’s seat cushions are fully reversible, providing practical comfort. Its design contours are softly flowing and elegant, which present an impressive appeal due to the turned timber legs, elevating its attention-getting stance – a genuinely graceful and timeless sofa design. 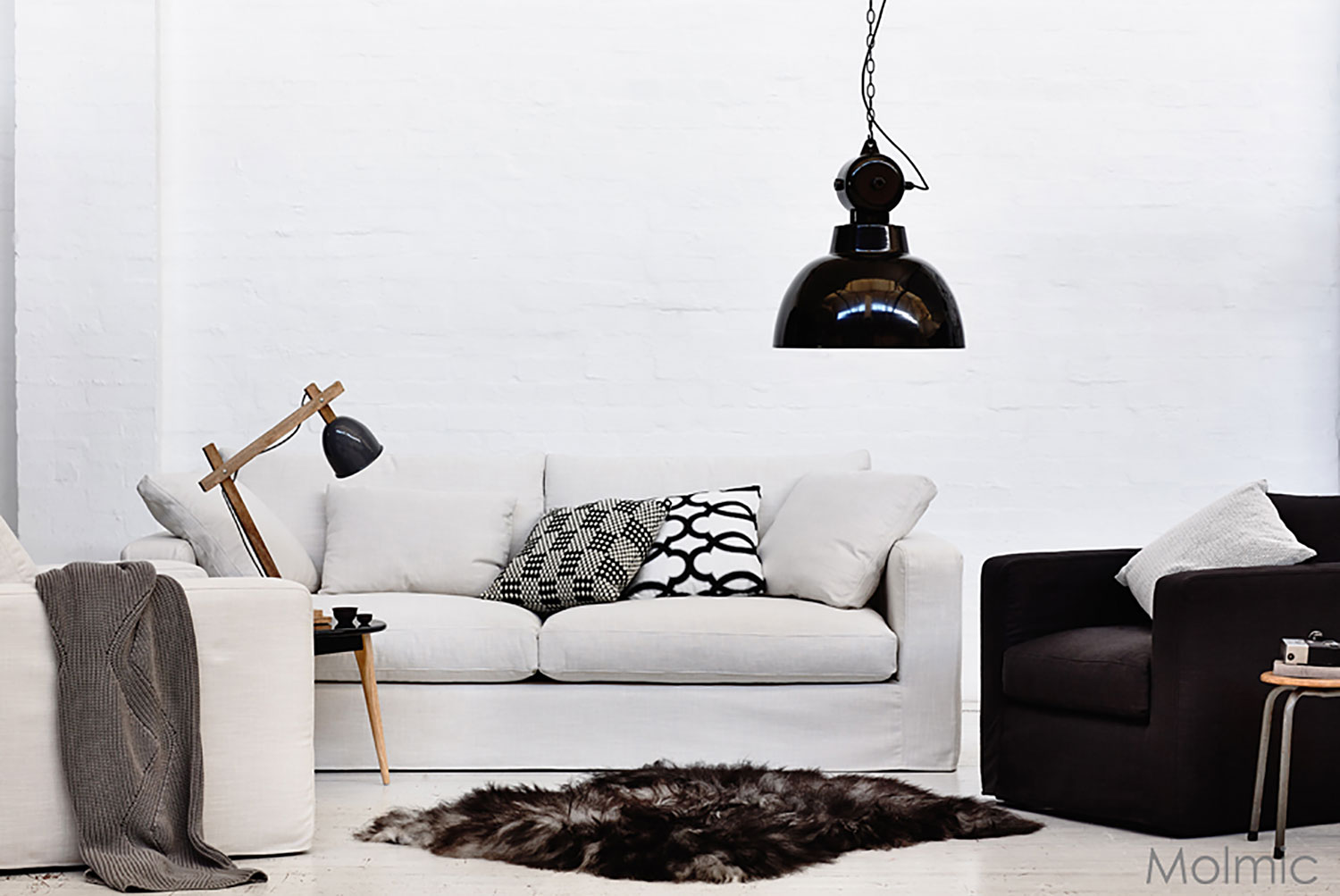 This fabulous sofa design is one of Molmic’s most popular, practical and elegantly designed sofas. Molmic describes it as ‘classic warmth, reminiscent of the alluring English countryside,’ however, given its reputation for providing lasting relaxation for so many Victorian homes, we prefer to label this gem a Melbourne icon. With cushion backs filled with a natural feather blend filling and showcasing Molmic’s classic loose-fitting fabric design, Steele Avenue blends functional brilliance with a graceful and time-honoured appearance. Pictured in Molmic’s Urban Snow linen fabric. 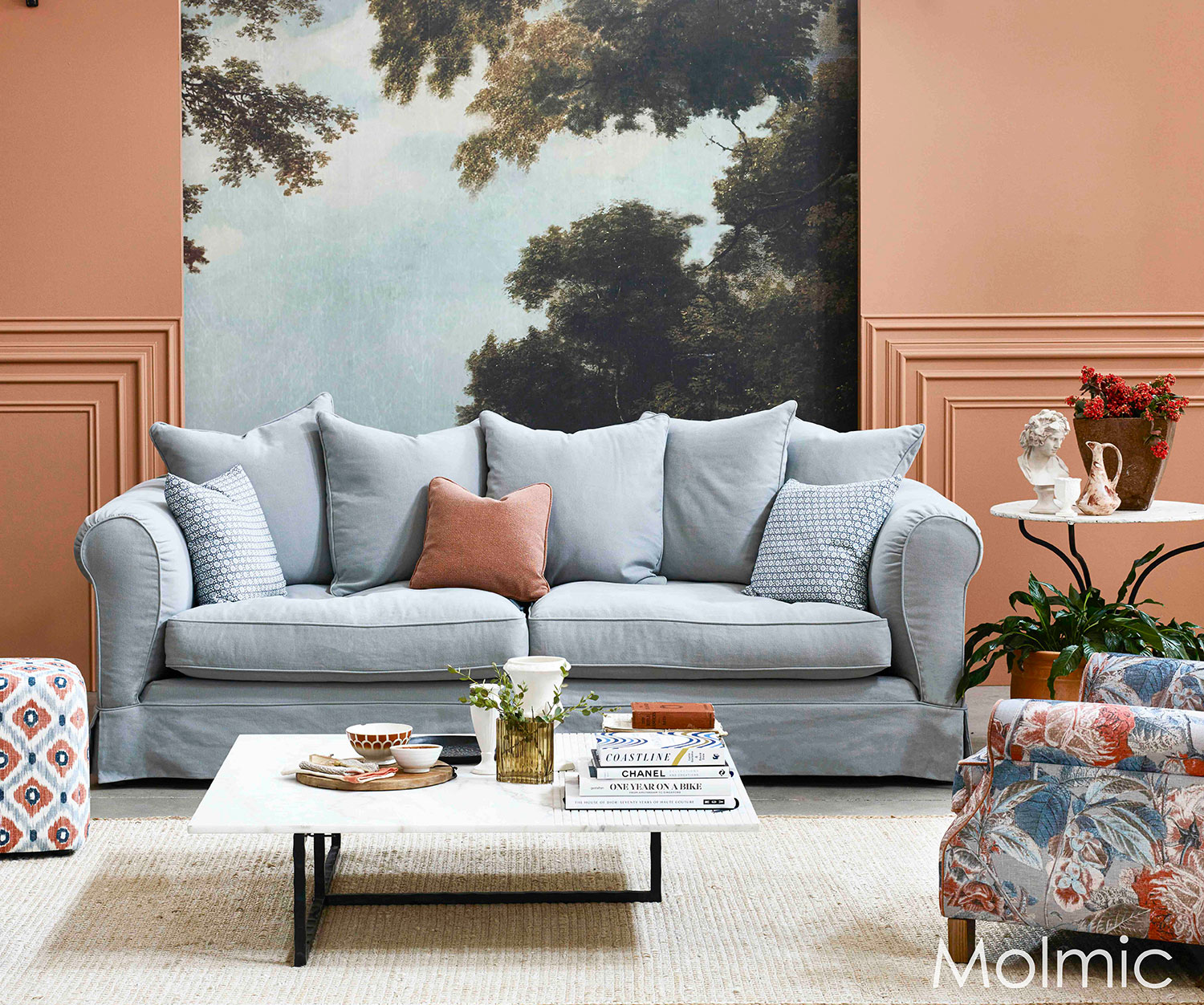 If a statement piece is the order of the day, this sumptuous and loveable loose cover designed sofa from Molmic is sure to impress. With its scatter cushion design supported with Molmic’s naturally comforting feather blend filling, Loft presents classic European elegance with a fresh-faced modern punch. Pictured in Molmic’s sweet and subdued Tahoe Mist fabric.

To learn more about Molmic please visit: Made in Melbourne: Leading Fabric Sofas by Molmic 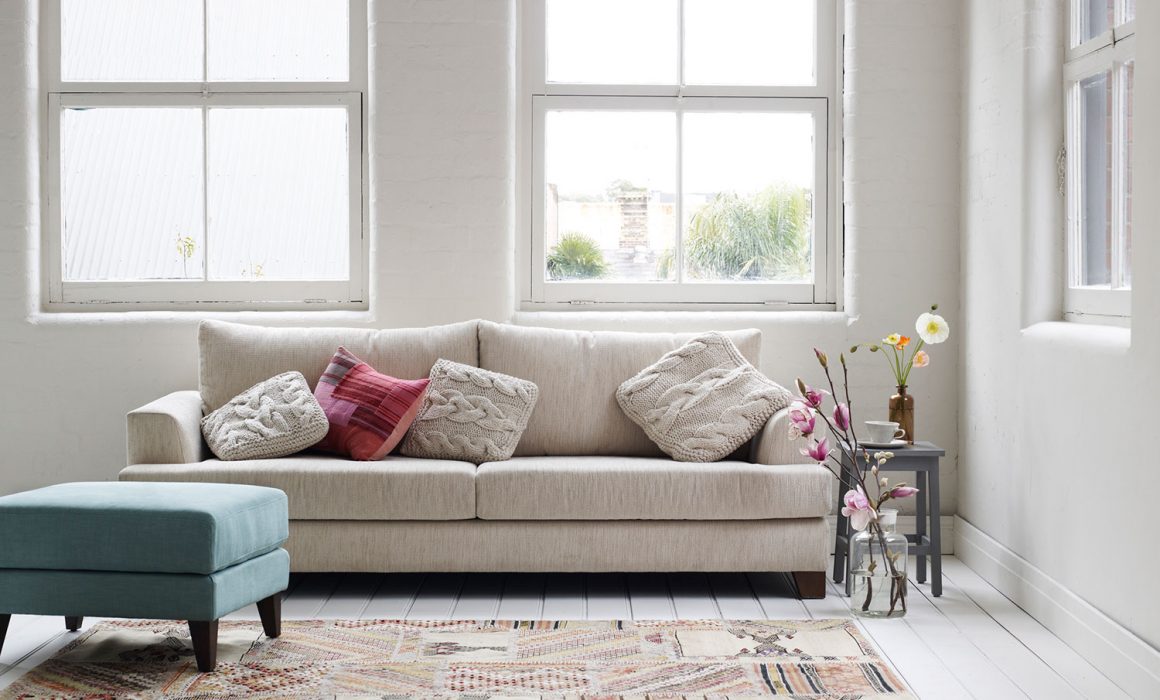 Suppose you’re seeking a quality Australian made fabric lounge suit or designer chair. If this is the case, chances are you’ll be familiar with either a classic, contemporary or loose cover sofa product handmade in Melbourne by Molmic. Why? Because their high build quality and timeless designs have stood the test of time and today are still continually used and loved in so many Victorian households.

Molmic is an award-winning family business that’s operated in Melbourne for more than 30 years. They hand build, stitch and upholstery finish every individual product they make, choosing to focus on everlasting strength and absolute care in construction. The detail is immense, and the final results demand positive attention.

While many of the pieces are constructed from reclaimed or salvaged Tasmanian Oak, others use sustainable forest select timbers in their construction. Each allows Molmic to provide a ten-year structure warranty on each product, providing great value for money when considering the item’s lifespan. 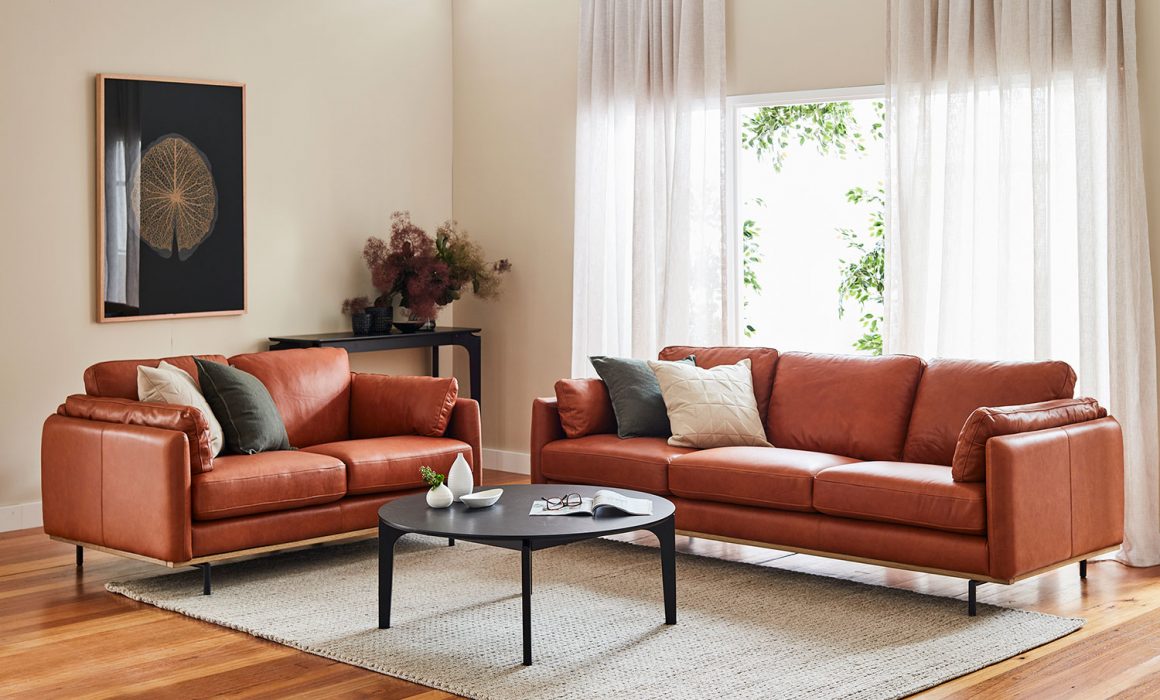 The American design movement Mid-century modern is an interior design, graphic design, architecture and urban development style that was popular from 1945 to 1969.

Its design aesthetic was aligned with the Modernism movement of the period that included cubist artworks such as Picasso’s Weeping Woman and standout architecture including Frank Lloyd Wright’s spiral designed Guggenheim Museum in New York City.

The style is typically characterised by clean, simple lines and practical use of materials. The inclusion of decorative embellishments in furniture was limited, with more a focus on a foundation in bold design shape combined with a totalitarian attitude towards the object’s function and usability.

Throughout the 2000s a revival in Mid-century Modern design has grown in popularity due in part to popular television series such as Madmen and Masters of Sex; however, its design appeal combined with clever functionality is also a firm reason for its revival.

Stolz Furnishers now stock a comprehensive range of Mid-century Modern products including the Brandy sofa (pictured above) featuring luxurious semi-aniline leather. Its texture is soft, it is hard-wearing and is visually stunning. Keeping in check with the modernist approach, Brandy features a sleek low back design, a timber plinth feature on its base, slim-lined metal legs, plus two leather colour options: Brandi (pictured) and Carbon Grey. Special orders from a wider range of different leathers and colours are also possible. 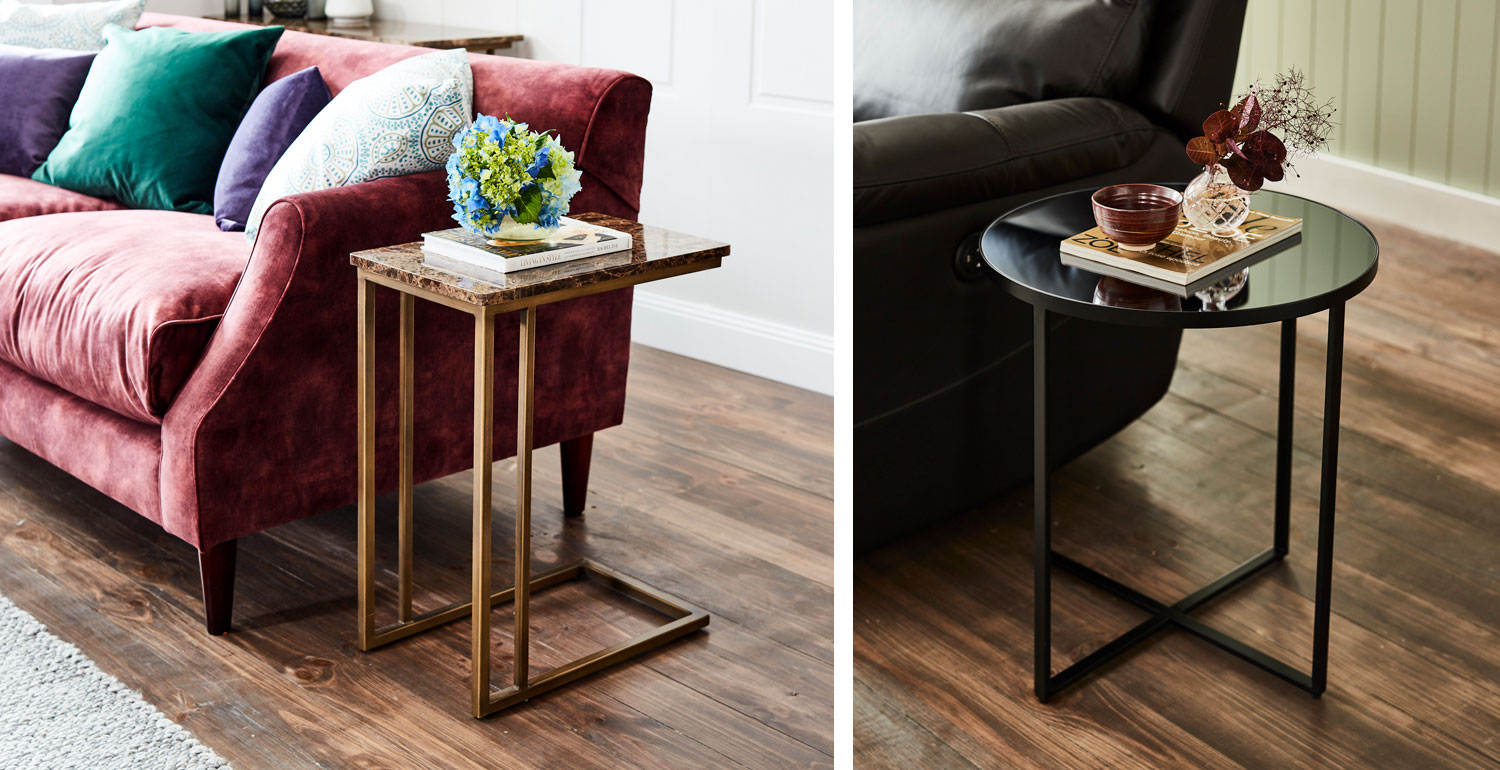 From left: Emperor supper table and Torrance side tables

If there’s one signature within the home that speaks volumes for the Mid-century Modern movement it would have to be sleek and contemporary coffee and occasional tables.

A case in point is the cleverly styled Torrance Range, including a large contemporary coffee table with smoked grey glass top and crisscross black metal frame. The smaller Torrance side table follows the same design sensibility and appeals with its fine metal base.

The Roma Range of occasional tables includes a lamp table, coffee table, hall table and buffet. Each features a herringbone timber pattern that’s both beautiful yet simple enough in its approach. The herringbone is fantastically matched to classic Mid-century Modern brushed bronze metal legs and bases, with shapes influence by pre-modernist German Bauhaus architecture. The combination of detailed stained timber and brushed bronze proves a collection of notable style. 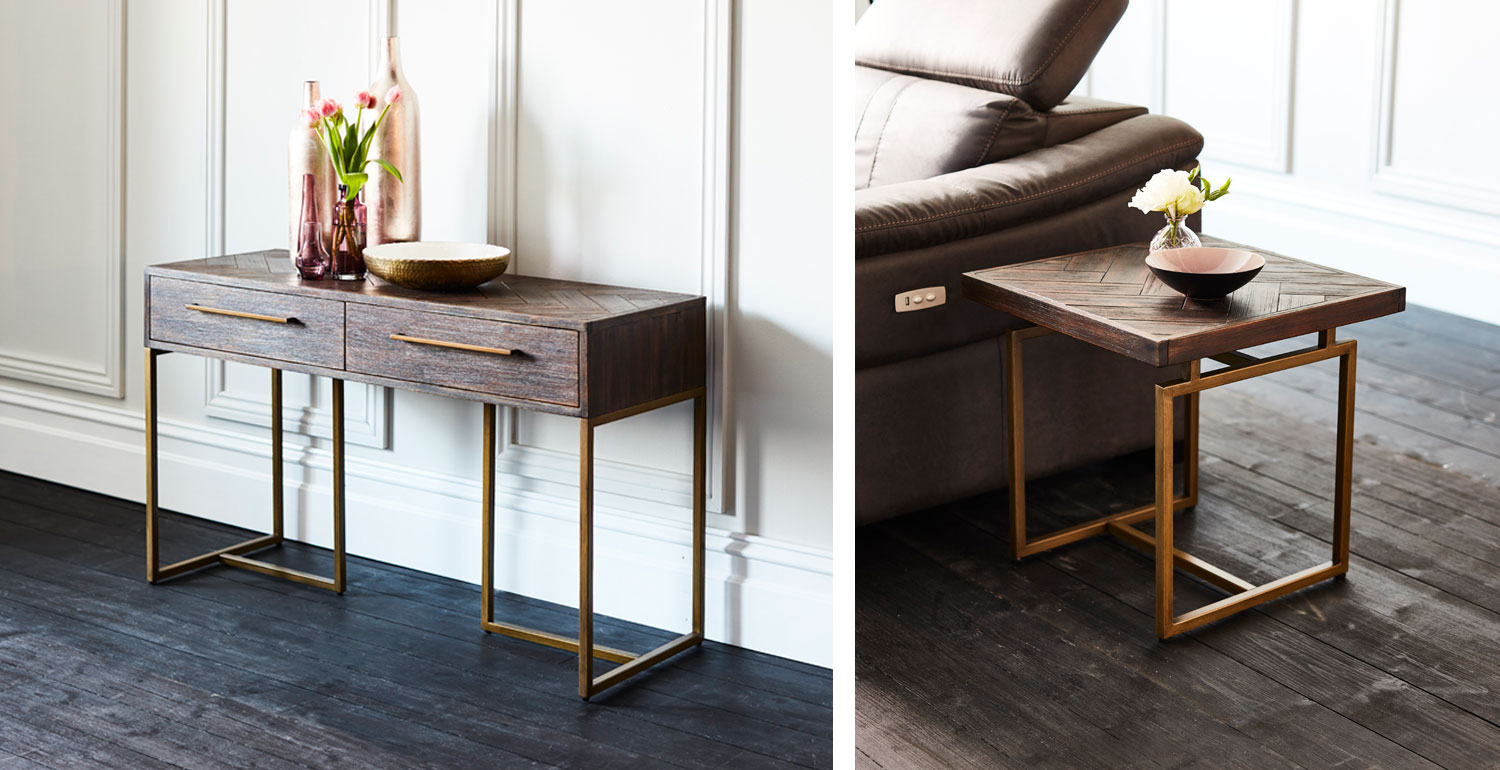 One of the more intriguing pieces available from Stolz is the Nordic hall table (below, left). While simple in design appearance and materials – MDF with Ash veneer top – there’s a visual game at play that’s standout Mid-century Modern cool. Take a closer look at the timber legs that rise and taper into shoulders that tuck underneath the tabletop. This presents the illusion of a floating platform tabletop, not unlike a museum display stand. It delivers simplicity and elegance without overstating its presence.

Other furniture choices that follow the Mid-century Modern style include the Emperor supper, coffee and console tables, also featuring brushed bronze bases and legs. These are perhaps a little richer in appearance as they include sophisticated brown marble tops in both square and circular designs. While leaning toward a more regal look, they’re a perfect accompaniment to both modern and traditional home environments. 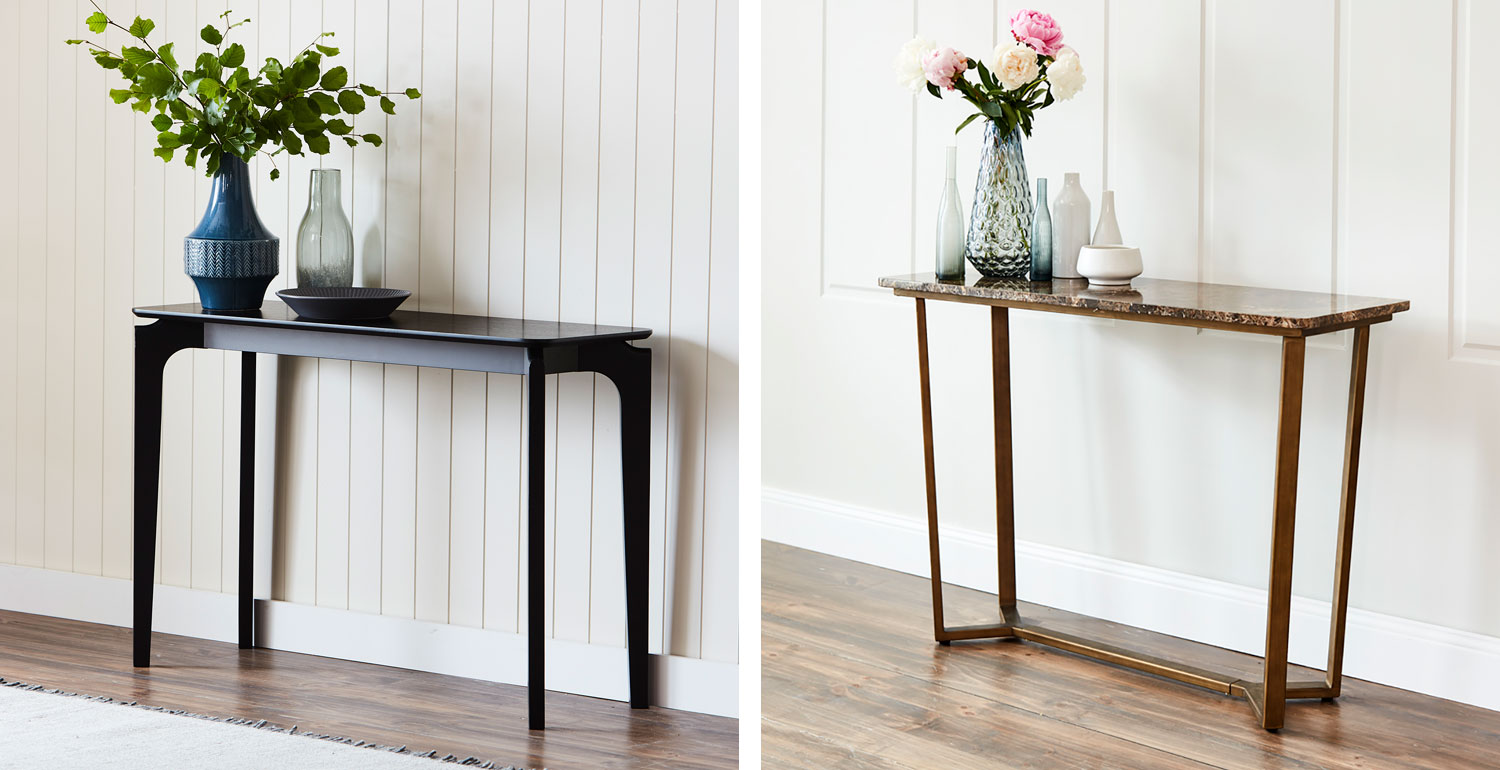 What Is Aniline Leather?

Aniline leather is a high-quality product. Aniline actually refers to the dyes that are used in making the final product, once the hide is tanned. It is a special treatment process used on the fine Napa hides. This process makes it stand out among the many kinds of leather.

Aniline leather is vegetable dyed, along with a light coating, with minimal extra care required.